The 21st Century’s Corporate world is very dynamic and at the same time competitive in nature where each and every business entity is striving for their expansion and growth at global level and for attaining this, they are heading towards organic ( internal) as well as inorganic (external) methods of growth. Such as some business tycoons are joining hands with other corporate entities to take the advantage of economies of scale and to eliminate the competition. In order to survive in this competitive environment, it has become imperative to enter into various arrangements which involve Mergers, Amalgamations, Joint Venture, Acquisitions, Takeovers, etc.

And one of the emerging trend which has been adopted rapidly by various entities is Mergers and Acquisitions.

Before we proceed with the legal complexities involved in the process, let’s try to understand the meaning of the term ‘Merger’ and ‘Acquisition’.

There are various types of Mergers which are commonly used in the corporate environment, some of them are as bifurcated below: 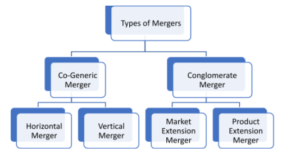 Whereas the term “Acquisition” refers to a transaction or arrangement where a Company acquires, takeover or purchases another Company.

Sometimes, these terms are often used interchangeably, but they actually differ in meaning. In merger the arrangement between the entities will be always amicable, whereas the acquisitions can either be hostile or friendly.